When I Discovered My Love For The Mountains

When I Discovered My Love For The Mountains

Our second feature of the Explorati series. Know more

“After they left, it was just me and the mountains for as far as the eyes can see. I will never forget that half an hour. It was scary then. But now, when I think about it, it was really amazing. Those are the moments which I will cherish forever….”

A mountain lover and a traveller. And moreover, a person who has quite a few memories to share. This is the story of Nitish Thakur, who recently came back from his Iceland trip with the beauty of the auroras imprinted in his heart. He didn’t keep memories of them all to himself. He made it sure to capture them all with his camera. To tell stories forever, to all.  A computer engineer by education, Nitish received his degree from the Punjab Technical University. Since 2013, he works as an administrative officer at United India Insurance in Jhansi.

Sometimes a picture can tell a story worth a thousand words. While we were in search of our next ‘Explorati’, Nitish Thakur won our attention with his Instagram feed. His pictures are indeed a work of art. With pictures of mountains, snow and the valleys, his deep love for the mountains is apparent.

“Mountains are like that, you will get addicted to them. Once you have been there, you are bound to go there again” Nitish said when we asked about the story behind this love for mountains.

How did it all start?

For Nitish, it was not until 2015 that he actually decided to pack his bag for a trip.It was a spontaneous decision triggered by a 10 min video of a traveller on Youtube.

‘’I saw a video of a person who travelled from Alaska to Argentina. His name was ‘Alex Chacon’. That video, even though unrealistic in my context, really inspired me. The job turns you into a machine sometimes. I was in desperate need of a journey at that moment of my life.  A video like that was kind of the wakeup call I needed. That ten-minute video was more than enough for me to get out and  start travelling’’

His first trip was a bike ride to Leh.  At the last moment, everybody backed out. But that didn’t stop him. He went to Manali, booked a bike and rode to Leh. During that journey, he met a group of people who were also on a bike trip along the same route. Many of them, like Nitish, started out as solo travellers and then met others on the way. It was a group bound not by nationality, race, or language but by pure wanderlust. Nitish travelled with them for the next 15 days and visited Leh, Pangong, Nubra Valley, Turtuk and Hanle. For Nitish, the best thing that came out of that journey was the people he met along the way.

“It’s been more than two years now but we still stay in contact. Some of them have grown to become my really good friends”

After the trip to Leh, the love for mountains hit him. Two months later, he went on a bike trip but this time to Spiti, starting from Chandigarh to Manali, Kaza, Kibber, Lahaul, Ki and all the way back to Chandigarh. And it’s not just bike trips, He has also been on treks like Dodital and Darwa pass to name a few.

The last time Nitish went for a trek, it was to Bali Pass.

“Bali Pass was totally next level from all the other treks I’ve done. It’s at a height of 4900 m and is one of the few treks that will give you the view of some enormous peaks like the Bandarpoonch, Kalanag and Swargarohini. It was really amazing and a bit dangerous too. Not only is that place hard to access, you have to negotiate some tricky terrains too. By the time we were coming down, it had already started snowing. But fortunately, we had a local guide and he helped us throughout the trek” 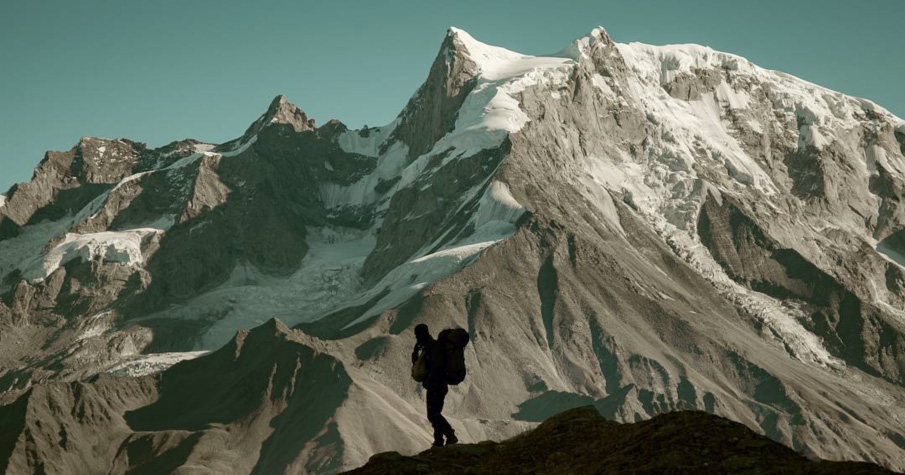 On the top and alone

“Last year in April, I went on to do the Darwa pass trek. As usual, I started alone.  But on the way, I met two guys who were National Institute of Mountaineering graduates. When we reached Darwa pass, they continued to Hanuman Chetty but I decided to stay back. And it was just me and the mountains for as far as the eyes can see. I stayed at the edge of the cliff for half an hour. It was really cold, the wind was gushing and snow everywhere. That half an hour, I will never forget. The view from up there was amazing.I was also a bit scared. But now, when I think about it, it was really amazing. We are city people, these kinds of experiences doesn’t happen in our life every day, but when you get an opportunity, make the most out of it.”

When it comes to family and travelling

The truth is, it’s not very easy to balance family and travel. With all the dangers of travelling to the mountains, it’s even harder for people like Nitish.

When you’re working away from home, family expect you to come home when you plan to take a break. So you manage your days in a way that you can spend some time with family and some for travelling. But the situation can be a little tricky sometimes.

“There is an inherent risk involved with travelling at high altitude and convincing my family for my first trek was not easy but now they’re used to it. Acclimatization is happening for them also’’.

‘’Planning ahead is the key. Club your weekends with casual leaves, or if there is a long weekend coming in the next year start planning for that already. In my case, I plan three months in advance. Planning ahead is really important when it comes to budget too. Research the place you are planning to visit. Spontaneous travelling might sound cool but more often it will end up on the wrong side of your finance. Always ask for advice from people who have already been there.”

Something that has worked for me

“I am not talking about travelling with only friends. Find like-minded people from social media, or talk to other travellers on your way so that you can share your expenses especially on accommodation and travel. It might not be easy, and you will have to put in a lot of effort. The first time I went to Leh, I was really scared. But I contacted people on Instagram who had been there already. They gave me tips which helped me a lot”

And our little talk ended with a small quote from Nitish.

“When you have a routine life, travelling can be the break you need. During your travel, you meet people, learn about their life and culture. This world is not just about you, there are others too. Sixty percent of travel is not a fairy tale. Some things will be nice, some not so much, but try to learn about everything. But whatever your travel experience be, you will always have a story to tell.”

When I Took My Dream Out Of The Drawer

How I Became A Weekend Warrior? An Explorati Story
Got a travel story?
Submit your article and become a contributor
View articles by
Recently added
RSS Feed