Top 12 Marathons In India Totally Worth the Sweat 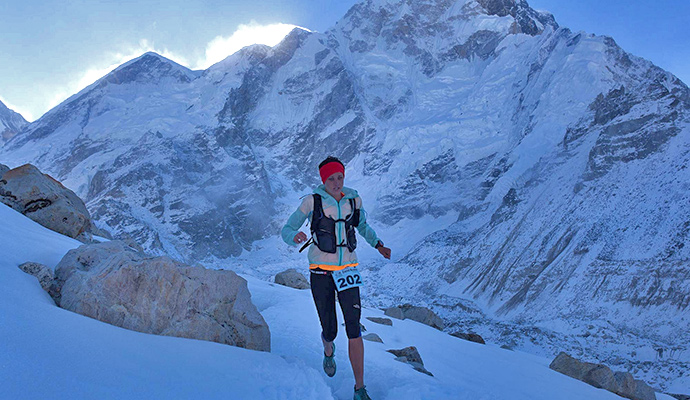 Top 12 Marathons In India Totally Worth the Sweat

Has it ever occurred to you, that if you’re on a business trip, what is it that stops you from keeping your laptop aside and leaving the conference room to just run and check out what your neighboring area has to offer? Or, has there ever been a time when you just think that this is it; I cannot stay in here anymore, I need a break from this place. Then, you have opportunities lying all around you. What if you stay some place and need a break or something thrilling in your life. All you need to do is put on your shoes, plug those earphones in, and run!

There’s Himachal Pradesh, Karnataka, Maharashtra, Ladakh and the list goes on for the places that conduct marathons across the country. Here is a list of the 7 best marathons that you can be a part of in India! Don’t worry, you have a lot of places abroad that have such marathons as well, in case you are not content with what your country serves. 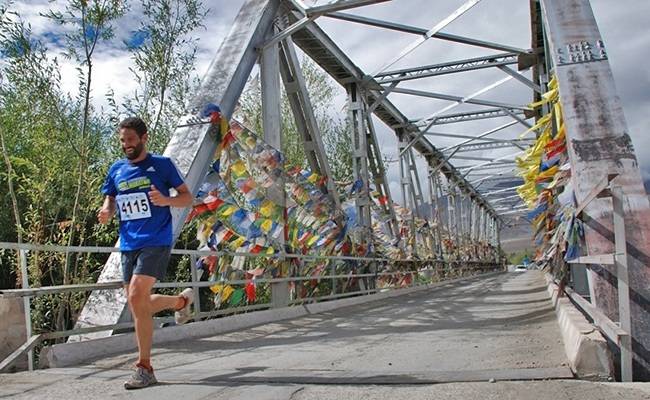 If you think you have a high endurance, this is your place to prove it, to yourself! The world’s highest marathon takes places here. At a height which is just way beyond the sea level; where there is breathlessness prevailing, not only because of the altitude but also the breathtaking view around you, all the way till your sight permits you! There are four races that one can be a part of – the 7 km race, the half marathon, marathon and the Khardungla Challenge! All these races have you going through the city and the outskirts in such a manner that you see the cold desert in its most splendid manner.

The one that ranks the highest in toughness is the Khardungla Challenge- with a distance of 72 km to cover and mind you! The road is one that is intimidating to many- also known as the world’s highest motorable road- and your physical stamina and mental fatigue is tested to the limits here. You run past the starting line, and you’re a winner there itself, to have the strength to decide that you want to do this, is commendable. 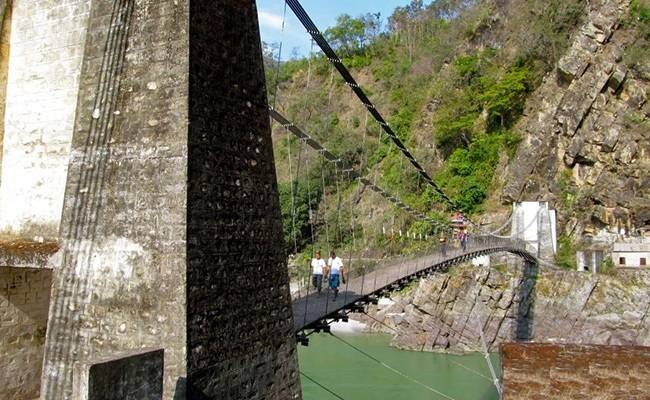 With distances of 5 km, 10 km and 21km (half marathon), Rishikesh in Uttar Pradesh engages you with basic run-ups for you to prepare for harder ones as you grow on and go past, one after another; to expose yourself to more marathons and places, at the same time giving you reasons to mingle more with people who would want the same things as you.

The half marathon is very famous and you cover scenic views along with the township in this marathon; you have the bridge, the beautiful river (where rafting happens), the horrid road (where your energy is needed the most), the bustling town (people cheering you) and the end, where you heave relief that you’re done with the race. 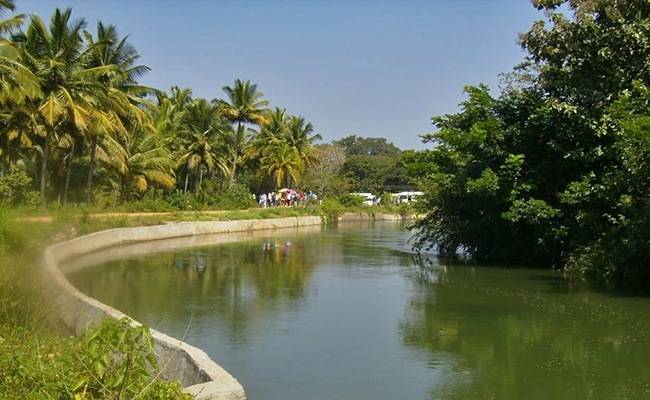 Jumping to the south of the country, you have the Kaveri Trail Marathon and you have a choice of 10 km, half marathon or marathon to choose from. What you learn here is, self-sustenance and enthralling hope that stems in within you that you will compete and face the challenge lying ahead of you, step after step that you take along the Kaveri River, the paddy fields and the muddy trail too, in Srirangapatna.

There’s bucolic beauty engulfing you. This race isn’t one that pleases many, but the reason it is enlisted here is; till you don’t fish in the rough seas and feast on it, you’re not going to be able to know what all you may have to go through if there were only calm waters around. 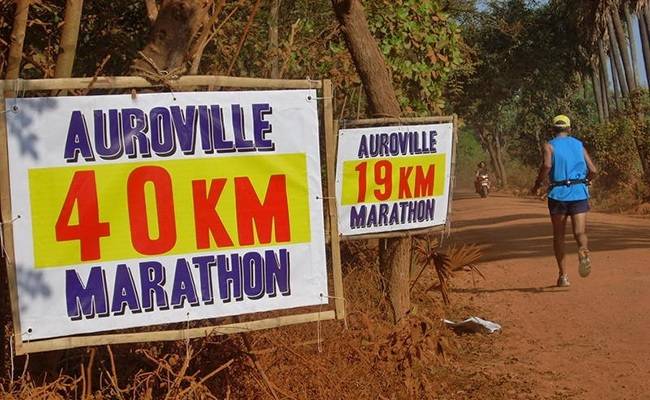 An event where there is no winner or loser, no person who broke some record or no one who failed to complete the race. The marathons held here follows the slogan, ‘Run for the joy of Running’ and everyone lives up to that. Here, you have 5km, 10km, half marathon and marathon to pick from. You have company throughout, people guiding you and a happy atmosphere all around and greenery abounds. Running with people, pushing yourself, preparing yourself, your tenacity is checked, your endurance is measured and happiness is achieved. 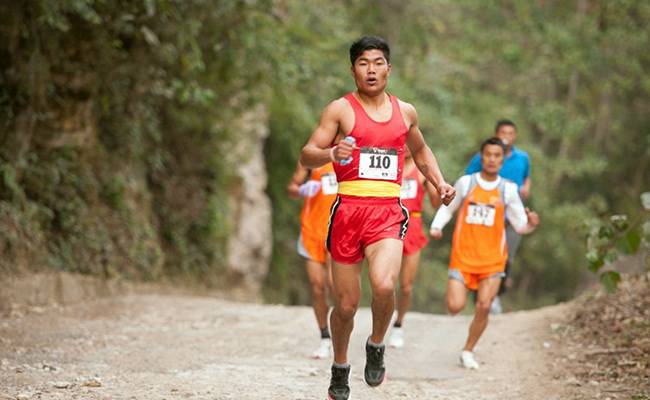 Picture this, you’re running with a bunch of other people, of ages varying from 18-60+ and you just going on and on and on, up and up and up! Starting from the baseline of Mt. Abu, the half marathon makes your way all the way up to the hill station where you can finally let your breath go and pat your back as to completing such a marathon that pushed your calves to screaming and screeching out to you to stop and no, you didn’t! 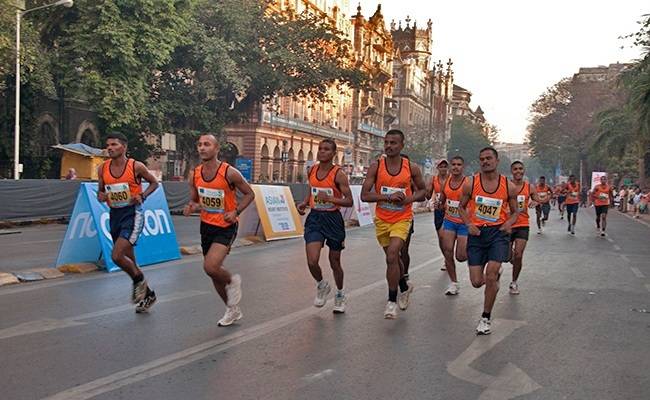 This marathon may not teach you a lot, may not test you physically in any different manner or stand out in any other arena, except for the masses that run along with you, from CST till after the Bandra- Worli sea link. Here, you have the marathon, half marathon, dream run (6km), and many other races for various categories.

This marathon sees the largest number of people participation and it helps in contributing so much to charity! It’s in this marathon that you get to see Mumbai as it is; running along with the bustling crowd, with all of that sweat and heat all around you. 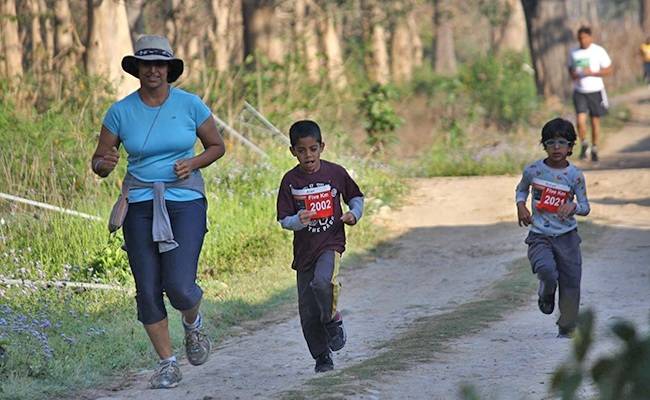 While you may have to look for your accommodation and sort that on your own, along with your travel through various places, you know one thing for sure. You have this marathon to look forward to, or as you pick from the half marathon, 10km or the 5km run. There’s not much of a hectic road that’ll suck the energy out of you, but it does get hot on your way! 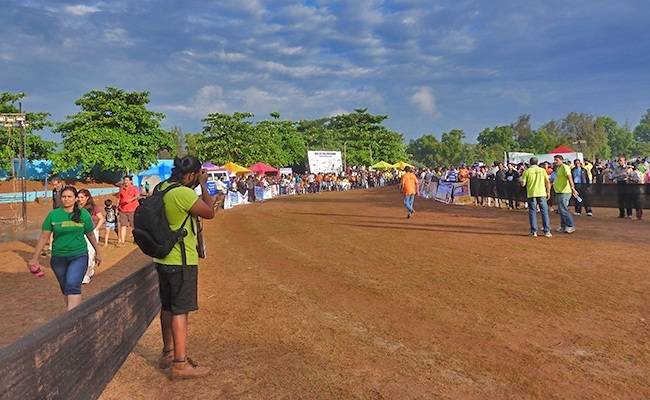 Goa in December is not just about beach parties and tourist-infested streets, it’s also about Goa River Marathon held annually at Vasco Da Gama. This marathon sees great participation from locals, tourists, athletes and celebrities from Bollywood.  This half – marathon route takes runners next to Zuari River offering a great view of Goa, often missed by tourists. 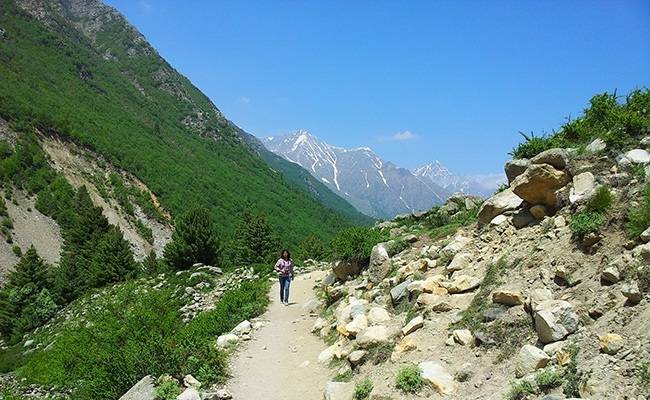 Himalayan Running and Living Marathon is another demanding marathon that is not just about stamina but also about your fitness levels and proper acclimatization to the thin air of the Himalayas. This marathon starting from Sangla, takes runners to over 10k feet roads with thrilling views of the Kinner Kailash range. It’s best for runners to arrive here a few days earlier and acclimatize themselves to the high altitude. 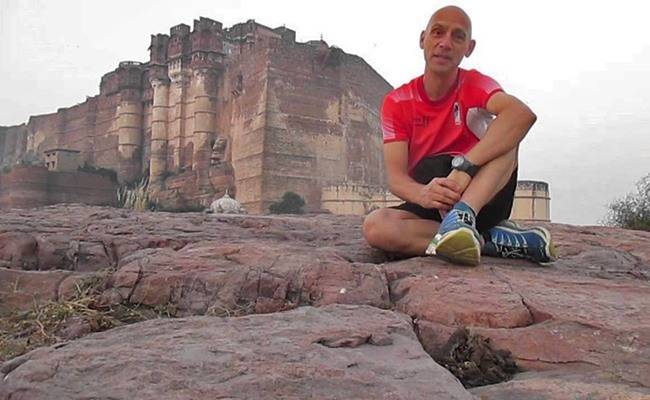 The Thar Desert Run is not an easy run as conditions are not easy here. Participants have to bear the hot desert sun as they slog through sand dunes and salt flats. Thar Desert Run is a 3-day long marathon run that starts from Fort Pokhran and ends at Jodhpur. 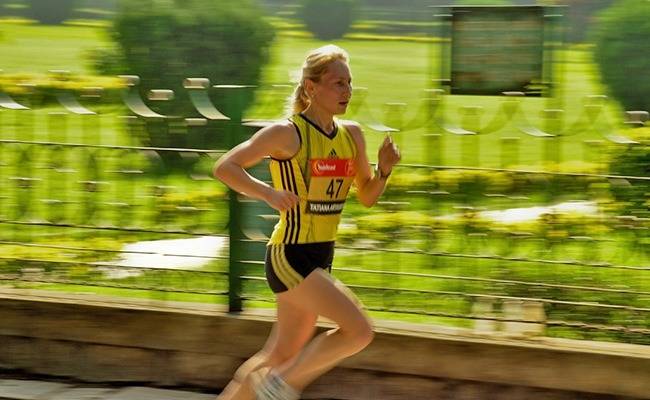 The garden city boasts of a very vibrant running culture. With Nike Run Club, Whitefield Runners Club, etc. Bangalore is a city bustling with runners of all distances. The city has 4 major events every year, which cater to all(10k, 21k, 42k, 50k, 100k), namely,

a) World 10k or TCS 10k (http://tcsworld10k.procamrunning.in/) Next date would be in May 2019. The TCS 10k is certified by AIMS and many international athletes compete in this. Different race categories are, World 10k (for International and National Athletes), Open 10k (for amateur runners), Majja Run (5.7km for fun runners), Senior Citizens Run (4.2km for senior citizens) and Champions with Disability (4.2km for disabled persons).

b) Bangalore Marathon (http://www.bengalurumarathon.in/) The event will take place on 21st Oct 2018. This is a relatively new event and puts Bangalore on the map of marathons. Here there are 3 race categories, the Full marathon (42.195km), the Half marathon (21.0975km), the 5k Hope Run (a run for Pediatric Cancer Awareness).

c) Midnight Marathon (http://midnightmarathon.in/) The event will take place on 8th Dec 2018. Registrations will be open soon. This event is a charity event and many people and corporates participate in this. The Full and Half marathons begin at midnight, hence the name.

d) Bangalore Ultra (http://www.bangaloreultra.com/) The Ultra festival runs for two days usually. The Ultra is for the love of running. Here prolific Ultra runners gather from around the globe to test their mettle. The race categories here are, 12.5km, 25km, 50km, 75km, 100km and the 24 Hour Challenge. 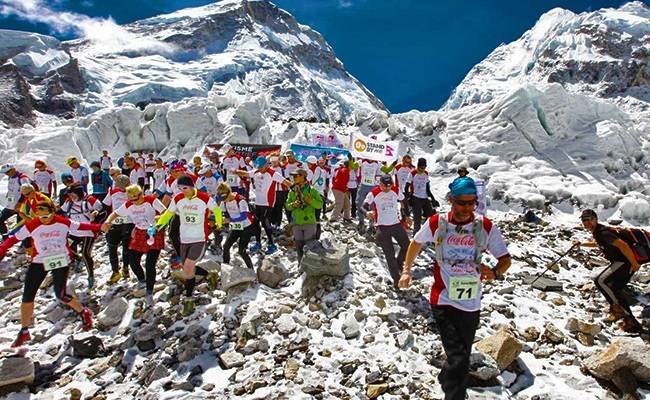 The rough-hewn beauty of the Nepal Himalayas is the setting for two marathons – both regarded the highest in the world. Given their rough terrain and high altitude, the Everest Marathon, and the Tenzing-Hillary Everest Marathon are only for the fittest runners.

The Everest Marathon starts at Gorakshep (17,000 ft) and ends at 11,300 ft, near Namche Bazaar; while the Tenzing-Hillary Marathon starts at Everest Base Camp (17,598 ft) and ends at Namche Bazaar (11,306 ft). Both include an acclimatization period before the race and while they are mostly downhill, there are a couple of steep uphill sections as well. Runners pass Sherpa villages, monasteries, and stunning views

Official Site: www.everestmarathon.org.uk
Dates: Everest Marathon will be held in May 29, 2019 and is a full, 42 km run

People say running is one thing in which they are true to themselves. There is no disagreement on this notion. You have people gushing past you, cheering you along and you have the path leading you to your finishing line! This is what running a marathon is all about. You may not have to win it, but if you complete it, you’re a winner for yourself and that is the first step to making it count.

8 Thrilling Things To Do in Mumbai for Adventure Junkies 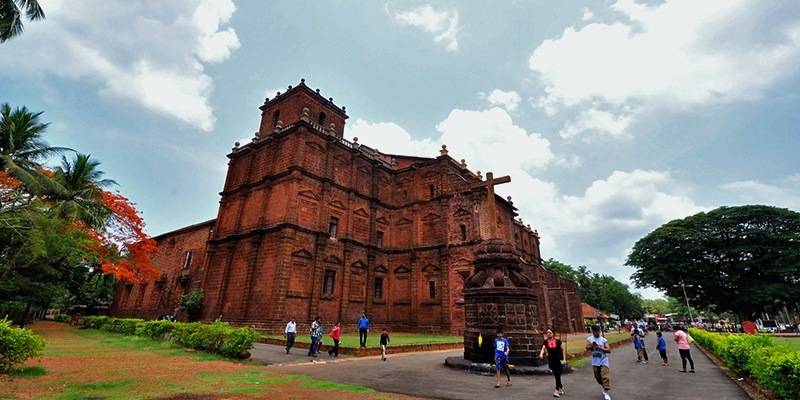 Best Tours & Excursions In and Around Goa
Got a travel story?
Submit your article and become a contributor
View articles by
Recently added
RSS Feed