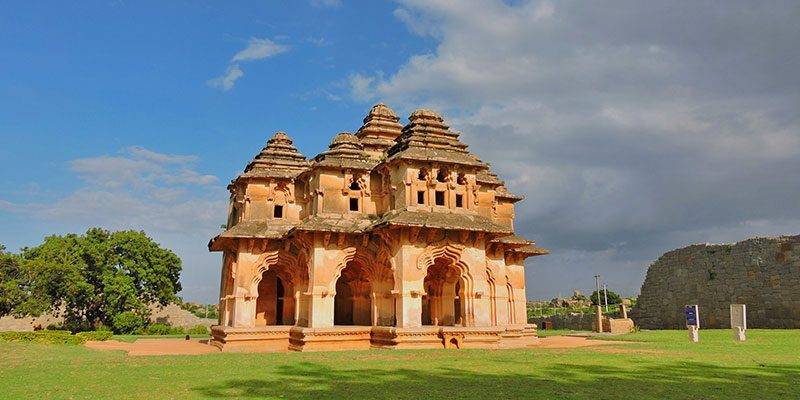 Can’t go to Rome? There’s a better deal in India itself – Hampi!

Is visiting Rome at the top of your bucket list? Do you feel like it’s a bit overambitious? Is it way out of your reach (financially)? The answer for your queries and worries are lying at the north of Karnataka for the last 600 years. I hope you guessed it right, Hampi!

Hampi – “As large as Rome, and very beautiful to the sight“

These are not my words, in 1520, Domingo Paes, a Portuguese traveller, visited Vijayanagara as a part of trade contingent from Portuguese Goa. He wrote his memoir as Chronica dos reis de Bisnaga, in which he stated Vijayanagara was “as large as Rome, and very beautiful to the sight … the best provided city in the world”

Watch your breath, Hampi will take it away

Spreading across an area of 60 sq km and 1600 monuments, for a true lover of ancient architecture and History of Hampi gives you the better deal. Most of the structures out there still puzzle experts.

The towering Virupaksha Temple, Stone Chariot peak of stone sculpturing, Stables for elephants and many more.

Without the barriers of glass and ropes you can touch and feel the curves and corners and admire the sheer brilliance long lost. With all this magnificence scattered all over, stop whining for not being able to visit Rome because with time

Rome will become ‘Hampi of the west’.

History of the Lost Kingdom – Hampi 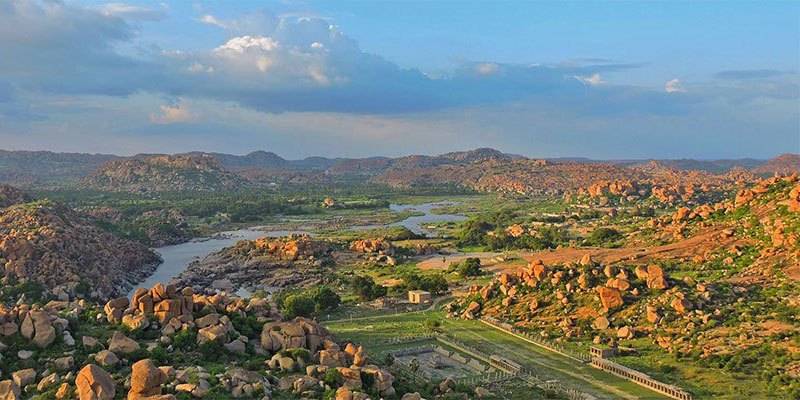 Before going for the architecture here’s a synopsis of all the peculiar history.

Hampi became the centre of Vijayanagara Empire capital in the 14th-century. Chronicles left by Persian and European travellers, particularly the Portuguese, state Hampi as a prosperous, wealthy and grand city near the Tungabhadra River, with numerous temples, farms and trading markets.

By 1500 CE, Hampi-Vijayanagara was the world’s second-largest medieval-era city after Beijing and probably India’s richest at that time, attracting traders from across the world especially Persia and Portugal.

The Vijayanagara Empire was defeated by a coalition of Muslim sultanates; its capital was conquered, pillaged and destroyed by sultanate armies in 1565, after which Hampi remained in ruins.

Check Out: The Heritage of Hampi – Walking Tour

A Chariot Made of Stones 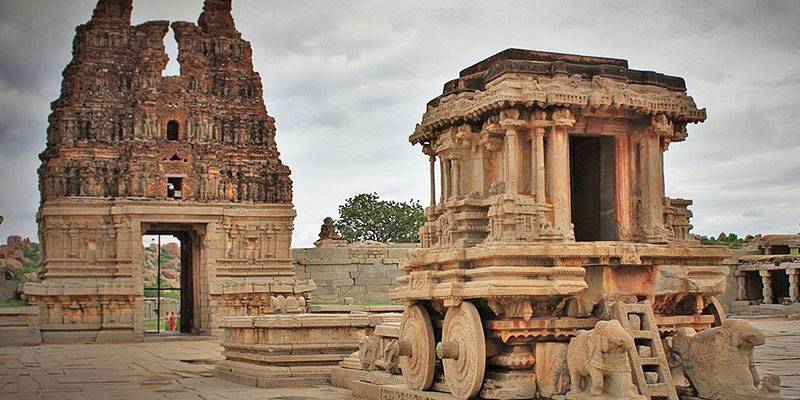 The most brilliant and puzzling piece of architecture in Hampi! At the first look, it looks as if made out of a single stone! But it’s not!

The artisans did an excellent work to hide the joints of multiple stones! And no matter how hard you look other than the wheels it will be hard to find any clue of their little trick!

A stable, not for horses but for Elephants! 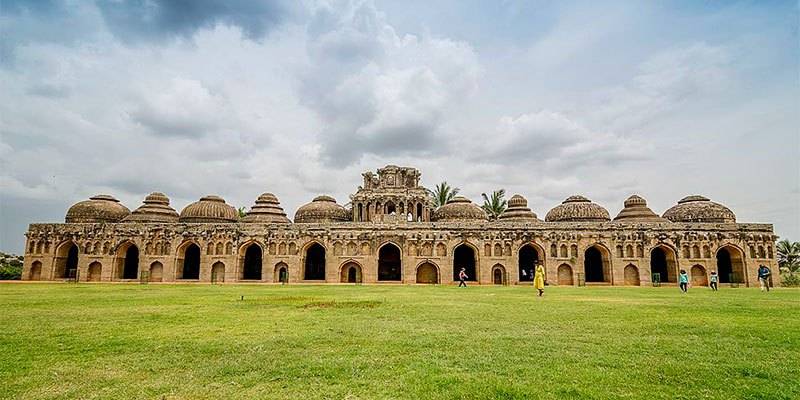 Hampi is one of the few structures which reflect the blend of Vijayanagara and Mughal architecture. It has a distinct central dome and a secret stair to the roof. With eleven domes with a height of 10 metres it has a large front entrance (for elephants) and a small one at the back (for mahouts).

The architectural style of the central Dome is similar to the ones found in the temples of Hampi while the other 10 domes represent the Mughal. The domes were designed in a variety of shapes, such as, octagonal, circular, ribbed, drum-shaped and fluted.

Both the above mentioned wonders are just the tip of the iceberg. The Zenana, Virupaksha temple, Underground temple which is under water for most part of the year and many more……

How to reach Hampi? 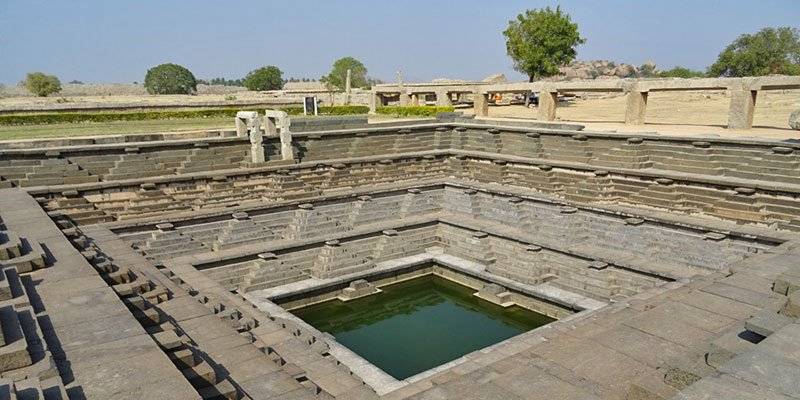 Well since we are talking about Rome. Hampi beats it hands down. Getting there is very much affordable and it won’t give you a hard time with all the formalities.

The nearest airport from Hampi is more than 143 kms away from Hampi which makes it almost a no go for tourists. Since Hampi doesn’t have its own railway station Trains halt at Hospet Junction (13km). Good luck getting hold of a ticket to Hospet during the season, early bird gets the worm!!

The best way to reach Hampi is by road. Whether it be Bangalore, Mumbail,Pune or Kolhapur Hospet has very good connectivity through road to all those places. You will get a seat in any of those AC sleeper buses connecting Mumbai/Bangalore and Hospet without breaking a sweat.

If you have reached Hospet then from there going to Hampi won’t be a problem. Local state buses will be running from Hospet to Hampi on every 20 to 30 minutes. The last bus will be leaving sometime between 8 to 8:30. This may not be the case during the season so make sure you enquire about that if you are planning to reach there around that time. In case you couldn’t catch a bus then are auto-rikchaws (or tuk-tuk) available 24*7.

Best time to go to Hampi 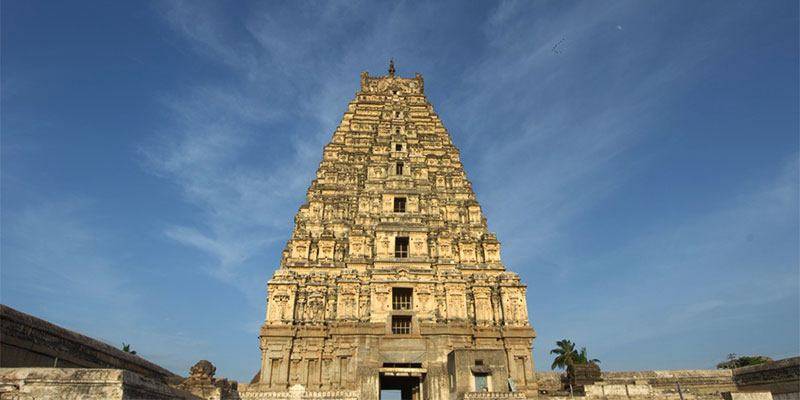 The best time to visit Hampi during the months of August to March. The temperature during this time is bearable. The absolute best months of the year are December & January. You can walk around exploring without getting the being paranoid of the Sun. The months from April to June can be avoided because the summer in Hampi will come down hard at you.

So start practicing ‘DHANYAVADAGALU’ rather than ‘molte grazie’.