Bikaner Tourism | Places to Visit | Things To Do

Ride the train to get to the Bikaner Junction. You can also take a plane to Jodhpur, then take the train from there. There are buses to and from Delhi and other major points in Rajasthan with destinations to Bikaner.

The most interesting activity for visitors to Bikaner is to get down to the Camel Research Farm and drink some camel milk. Other places in India offer camel safaris. It will be a unique experience to see how milk is extracted from a camel.

Once you’ve got around with the camels, there are other things to do in Bikaner. There are forts, sanctuaries and temples to check out too. It is a tremendous experience to visit either the wildlife or cenotaphs, the springing deer or imposing forts.

For sumptuous meals & shopping, visit the Bhujia Bazaar. Taste the alu bhujiya, a potato dish with a Rajastani spice. There are many sweet shops selling specialty and North Indian desserts.  Some sweets in Bikaner are made with camel milk. Amazing, isn't it?

Bikaner is a good place to shop for carpets. Some are made with local wool. Even products made of camel hide can be found here.

Bikaner itself is a little off the beaten track. Certainly the flavor is different to Jodhpur or Jaipur, where touts and tourists throng in equal numbers. Wander the streets, try the foods, and talk with the locals. This is one of those cities where every turn left or right could be a new adventure.

Although Bikaner is not on a hill, it is on a slightly raised ground and surrounded by protective walls.

Visitors to Bikaner should be careful of snatchers and pickpockets. Carry along a little cash and always protect your passport. Women are advised not to go out alone at night. 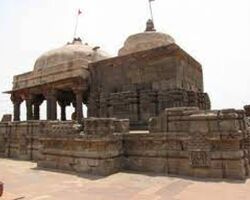 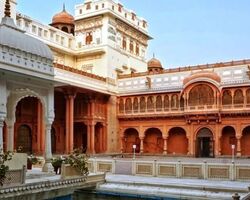 Take a tour of the popular attraction of Rajasthan, Bikaner is surrounded by the great Thar desert and is the home...

Top 10 Places to Visit in Bikaner

The Prachina Mueseum which is situated in the Bikaner Fort was established in 2000 by Siddhi Kumari, daughter of Maharaja Narendra Singhji. The... Junagarh Fort in Bikaner was built in 1593 and since then has never been conquered or seized. The fort comprises several different interior... Where else in the world can you drink camel milk or buy the kids camel ice cream? More than two hundred camels live and breathe on this unique...

The Ganga Singh Museum in Bikaner is one of the most reputable museums in Rajasthan. There are archeological artifacts from prehistoric Harrapan... Lalgarh Palace is another red sandstone jewel in Rajasthan. This stately palace had Rajput, Mughal and European influence in its style. The result...

Six kilometers from Bikaner, this temple gets thousands of visitors every year. As the temple is on the way to the camel farm, a visit to both can... The Royal Crematorium or Devi Kund Sagar was built in memory of Bikaner’s ruling family members. The marble cenotaphs, with domed roofs, stand... Gajner Wildlife Sanctuary is situated near Bikaner. One can view wild boar, black buck, nilgai, deer and desert fox. Deers graze on the plains and... Although it is now a hotel, Gajner Palace could also be considered a historical site. The 6000 acre palace was used as a hunting ground by former... Karni Mata temple is sitiated in the town of Deshnok in the Bikaner district. Also known as the temple of rats, this infamous temple is 32... 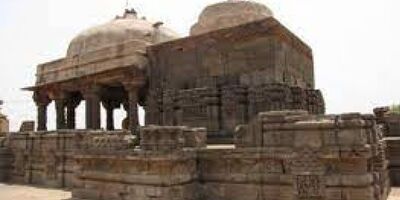 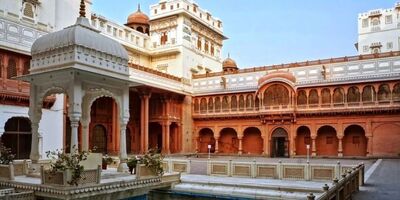 Take a tour of the popular attraction of Rajasthan, Bikaner is surrounded by the great Thar desert and is the home to the majestic Junagarh Fort.  Highlights Visit places like the Junagarh Fort, Lalgarh Palace, National Research Center on Camel and many more during this tour. Experienced...

Other travellers left Bikaner reviews and tips for you