Kanchipuram Tourism | Places to Visit | Things To Do

Kanchipuram is famous for its unique blend of art, history, culture, and entertainment. Located 80 km southwest of Chennai, the capital city of Tamil Nadu. Kanchipuram used to be the power centre of the Pallava dynasty during the 6th to 8th centuries AD. Kanchipuram, is renowned city for hand woven silk sarees and numerous temples.

Lying on the banks of River Vegavathy, Kanchipuram served as an advanced learning center for Buddhism and Jainism during the 1st until the 5th century. The city has derived its antiquity from various kingdoms like Pallavas, Cholas, Pandyas, Vijayanagar, Carnatic, and British. From the inscriptions found here the city was also ruled by Maurya and Chalukyas. This holy city which has enormous temples is the place where ancient Hindu Saint Adi Shankaracharya established the Hindu Monastic Pilgrim Center named “Kanchi Matha.”

Fourteen of the 108 Divyadesams (Pilgrim Center) for Vaishnavites is located in Kanchipuram itself. Kailashanathar Temple and Vaikunta Perumal Temples are the most vital historical monuments in Kanchipuram. From the survey conducted in 2008, nearly 5000 families has weaving silk sarees as their major occupation. Based from the Hindu Mythology, the weavers in this city are the direct descendants of Saint Markanda, a celestial weaver for Hindu Gods and Goddesses.

This town is also one of the largest producers of high-quality silk saris which are woven by locals through the use of handlooms. Shops selling silk wares and saris can be found in abundance along Gandhi Road. Interested tourists can also opt for touring the hand-loom factories where the Saris and other silk products are woven.

Kanchi Kundli is a Heritage Inn at Kanchipuram which educates tourists about the glorious past of Kanchipuram. In the evening cultural programs are held here where it is possible to learn about the art and culture of the town. GRT Regency, Hotel Baboo Surya, MM Hotel, Green Coconut Resorts are some hotels which give the tourists a pleasant stay at decent rates. Tourists can enjoy typical South Indian delicacies in Kanchipuram. The lip-smacking tastes of Dosas, Idlis, Pongal, etc. are highly irresistible.  One can enjoy these delicacies in various hotels in Kanchipuram like Shri Shakthi Ganapathi and Saravana Bhavan.

Kanchipuram is also the home to Vedanthangal bird sanctuary which is among one of the oldest bird sanctuaries in India. The Sanctuary is about 75 kilometres from Chennai and hosts more than 40,000 birds during the migratory season.

Almost every woman in Southern India has a treasured Kanjivaram Silk Saree of her own. Tourists can come across many people who throng the silk saree shops to purchase silk sarees for marraige. While packing up for a journey home, one should also leave some space for traditional handwoven silk sarees which can be purchased at reasonable prices from Silk Societies in Kanchipuram. 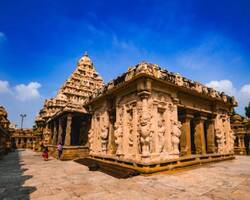 Take 2 days sightseeing tour of Kanchipuram and Mahabalipuram which were the architectural capitals of Pallava and... 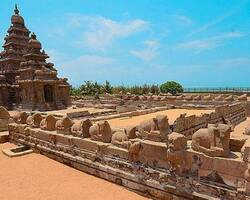 Witness the places in Mahabalipuram and Kanchipuram on this ten hours day tour from Chennai. Both are the ancient...

Top 10 Places to Visit in Kanchipuram

Located in the suburbs of Kanchipuram, this Jain Temple is a standing example for the existence of Jainism in Kanchipuram in ancient period. Built... Being built in 4th century by Cholas, Temple is dedicated to Goddess Parvati, the consort of Lord Shiva. Here the Goddess is termed as “Kamatchi... The history of Kailasanathar Temple dates back to 5th century. RajaSimha Pallava started the construction and was completed by his son Mahendra... One of the 108 holy abode of Lord Vishnu, Varadaraja Perumal Temple is an important pilgrim center for Vaishnavites. It is believed that all 12... Being located on the Sangeetha Vidwan Nainar Pillai street, Kanchi Kudil is an heritage museum which takes the tourists to the ancient social,...

This panchayat town of Kanchipuram District was founded in the reign of Nandivarma in 7th century. The town is renowned for the stone edicts which...

Sriperumbudur a town in Kancheepuram District is the birthplace of Saint Ramanuja has a Vigraha i.e. idol made of the five metals installed in a... This perennial lake is located 38 km away from Kanchipuram nearby Chengalpattu. This lake contains water even in summer. This is the second... Thiruthani is a village in the Tiruvallur District which is the adobe of Lord Murugan, famous as the Sri Subrahmanyaswamy Temple. This is one of... 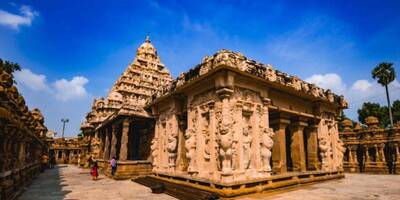 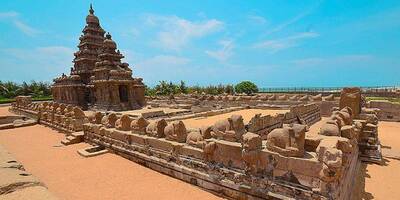 Witness the places in Mahabalipuram and Kanchipuram on this ten hours day tour from Chennai. Both are the ancient locations possessing rich heritage and cultural history in their temples, iconic monuments and stone carvings.    Connect with us Live by Clicking on 'Chat' or Whatsapp Click...

Other travellers left Kanchipuram reviews and tips for you

If you are a group you can negotiate with the taxi driver for a day instead of haggling with autorickshaws.
I like it
Report

South Indian Classical music concerts are held in evenings in the Kanchi Mutt, try to attend one.
I like it
Report