Warangal Tourism | Places to Visit | Things To Do

Warangal is one of the districts in Andhra Pradesh State. Warangal, Kazipet and Hanamakota constitute the Warangal District. The airport in Mamnoor village on outskirts of Warangal was once served as biggest airport during 1947 serving the Nizam’s of Hyderabad. Warangal is the center for the major political movement demanding separate Telangana from Andhra Pradesh. Famous freedom fighter Kaloji Narayana Rao was born in Warangal.

Kakatiya Dynasty played vital role in developing the Warangal as the city served as headquarters for Kakatiya Dynasty in the time period raging from 12th to 14th century. The city has numerous monuments, forts, and temples etc which were established during the Kakatiya dynasty. The famous traveler Marco Polo described about the cultural and administrative skills of Kakatiya’s in his writings. During 16th century, Warangal was ruled by Golconda Sultanate. It was also under Mughal Empire for a while. Currently Warangal is the declared as “Red Corridor” as there are sumptuous Naxalite Activities.

“Sammakka Saralamma Jatara” an important festival is celebrated in Medaram, on the banks of stream Jampana Vagu, which is 90 km away from Warangal. This festival is second largest festival in Asia next to “Kumbh Mela”. This festival is the accretion of tribal communities in order to honor the intrepid fight which took place between mother-daughter duo (Sammakka and Saralamma) and a Kakatiya King demanding justice. Nearly 6 million people take part in this festival.

Restaurants: There are many restaurants in Warangal starting from roadside Dhabas till posh restaurants. Cuisine would be typical Andhra Food with more spice including Vegetarian or Non Vegetarian foods. Jalebis available in roadside stalls are mouthwatering.

Shopping: Scroll Paintings, Brass wares are major attractions for a buyer as far as shopping is concern. Lepakshi Emporium, Subedar, DCWRA Bazaar and Hanumkonda offers wide ranges of souvenirs to be purchased. Hand worked Durries can be purchased from Kothawada. 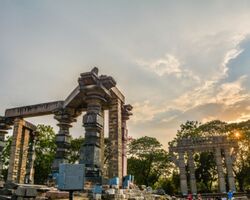 OVERVIEW Take this one day trip to Warangal from hyderabad and escape into the serenity of lakes, gardens, forts... 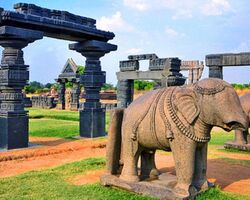 OVERVIEW Take this one day trip to Warangal from hyderabad along with the company of an experienced guide. Escape...

Top 10 Places to Visit in Warangal Dated back to 12th century, the Warangal Fort is a masterpiece of Kakatiya architecture. As per archaeological survey the original brick walls... Willing to have some memorable moments with family, then one should plan a visit to Kakatiya Rock garden during the stay in Warangal. This Garden... The much prominent attraction in Warangal, Bhadrakali Temple, was established by Pulikesi-II of Chalukyas Dynasty in 6th century. The Kakatiya... Much famed Thousand Pillar temple is the standing example for the Kakatiya Empire’s culture and architectural style. The temple is located on... Located in the town of Hanamakonda, Telangana State, the Thousand Pillar Temple is dedicated to Hindu deities Shiva, Vishnu and Surya. As the name... Pakhal Lake was established by King Ganapathi Deva of Kakatiya Dynasty. Dating back to 12th century, the lake sprawls around 30 square kilometers....

Gutta means “hill” in Telugu. This hill houses a temple dedicated to Lord Rama atop. 100 rock cut steps help the tourists reach the top. At... Being locally termed as "Kota Gullu",  the Ghanpur Temples were established by King Ganapathi deva during Kakatiya reign. It is known throughout...

Ramappa Temple is located in a valley near Palampet village of Warangal District. As per the inscriptions found in the temple, the temple was... Surendrapuri otherwise termed as “Mythological Awareness Center” is located some 60 KMs away from Hyderabad city. The center is the brain...

Read more
Places to Visit near Museum of Mythology, Surendrapuri Ramagiri Khilla or Ramagiri Fort is a magnificent place to be visited by anyone looking for a great day out in beautiful picturesque natural... 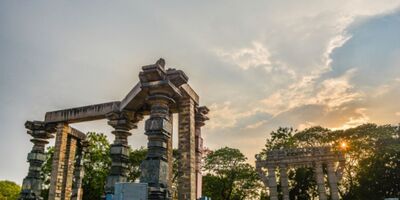 OVERVIEW Take this one day trip to Warangal from hyderabad and escape into the serenity of lakes, gardens, forts and much more. Explore the historical sites and temples of the city which was once the capital of Kakatiya dynasty.   HIGHLIGHTS Visit the 1000 pillar temple dedicated to... 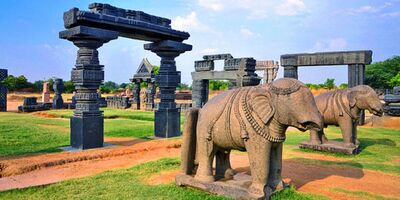 OVERVIEW Take this one day trip to Warangal from hyderabad along with the company of an experienced guide. Escape into the serenity of lakes, gardens, forts and much more.     HIGHLIGHTS During this tour visit the iconic temple which has 1000 pillars. Explore the Warangal Fort,...

Other travellers left Warangal reviews and tips for you

Richa
Autorickshaws may not be metered, you need to negotiate a final price before hiring.
I like it
Report