Orchha Tourism | Places to Visit | Things To Do

Orchha (or Orchcha/Urchha), frozen in time and a tranquil hamlet now, used to be the capital of the Bundelkhand Empire once. Orchha, a town of rich historical heritage will take you back in the time of Rajas and Maharajas. Have you heard about ‘shifts in time’? These are moments when people experience a moment of déjà vu of having gone back in time by several centuries. This is one place where you might certainly feel so. Orchha takes you back in time. Founded in 16th century by the Bundela chief, Rudra Pratap, this town located by the Betwa River is a dreamland for History enthusiasts. There’s the Chturbhuj Temple built on an enormous platform of stone. There’s a flight of hidden staircase to the rooftop. You cannot miss the view from there.

Orchha meaning ‘hidden’ is located on the banks of River Betwa which makes the setting even more beautiful and living up to its name. The striking forts, poetry carved chattris and the walls of the temples make the place delightful. The rich heritage of medieval times showcases the town Orchha. The picturesquely fascinating and medieval city attracts the tourists to its majestic temples and forts. The architecture adorns the natural colors in it.

It is an ancient town, frozen in time that still gives a sense of originality. A tour in town will enforce the travellers to travel back in time and look at the great monuments which still continue to regain their grandeur. The town serves many well-built historical attractions with some interesting histories.

There are the Raja Ram and Lakshminarayan Temples as well. The deities living in the former are said to have refused to budge from the spot when the plan was to place them in Chaturbhuj and the latter is a wonderful synthesis of fort and temple. If you are an explorer interested in dissecting historical relics, Orchha has a gift for you in the form of the fort complex made up of the Raj Mahal built by Raja Madhukar Shah, the Jehangir Mahal erected by Raja Bir Singh Ju Deo and Raja Rai Parveen Mahal built by Raja Indramani. Jehangir Mahal is a palace with elegant chhatris from where tourists get amazing view of the town with its temples and cenotaphs. Walls are adorned with beautiful paintings.

Ram Raja Mahal is in the heart of the town. It is known as the only place where Lord Ram was worshiped as God as well as King. The Raj Mahal has exquisite artwork by way of illustrious frescoes. The Jehangir Mahal has a strong and intricate architecture comprising of typical Mughal corner towers along with beautiful trellis work and graceful chatris. Jahangir Mahal serves a light and sound show in evening hours for all the curious minds wanting to learn the history of the town.

Rai Parveen is simply romantic. It was built for the king’s gorgeous concubine who had supposedly impressed Akbar with her love for the Rajput king. Sundar Mahal has a positive air of religiosity. It was Dhurjban’s seat of prayers after he embraced Islam for the girl he loved. UthKhana: A camel shelter of the king with a rooftop that provides a mesmerizing view of the Orchha town.

Lastly, one shouldn’t miss out on the 14 chatris for the Orchha rulers along Kanchan Ghat. It gives you a feeling of history pushing against the present to make itself heard. These cenotaphs are from 17th and 18th centuries, grouped along the Kanchana Ghat of the river Betwa. The rooftop of these chhatris provides fantastic views of the river.

Orchha is ‘photographers delight’. It’s a much less crowded, located in verdant greener, arable pasture and grazing land. There is a multiplicity of photo opportunities for those interested in wildlife, the local culture, or the many temples and complexes which gave the area its name.

Orchha's culture is captivating. It speaks about the people of the place, their beliefs and their lifestyles. The local masses of the Orchha are quite friendly towards the tourists. Although Orchha is not a dream-shopping place but it is filled with the traditional shopping stuff to lure the shopaholics. The ethnic kurtis and the pyjamas embellished with Rajasthani embroidery are exquisite. Also, Dokra crafts made up of wrought items serve as an excellent memento.

The food of the town is palatable; especially the way it is served by the street vendors is worth seeing. Tasty Potato patties with daal sauced with tamarind gravy, delicious Aaloo parathas and of course most tourists like the local delights ‘Kalakand’.

15 Kms from Jhansi, the Orchha Station lies in the Jhansi Manikpur section. You may also reach the place via Khajoraho. Orchha is really worth a visit.

A 2-Day tour of the historic town of Orchha, explore the mesmerizing architectural beauties of this majestic...

Top 10 Places to Visit in Orchha Orcha Fort is a big complex comprising of many places. Rajmandir and Jahangir Mahal are the most exquisite of these buildings. The way to Orchha... The Laxminarayan Temple is one of the main three temples in Orchha and dedicated to Goddess Laxmi, the Hindu Goddess of wealth. This temple was... Raja Mahal used to be the royal residence of former kings of Orchha. The exteriors of the palace are plain and towers crowned by chhatris, whereas... Raja Bir Singh Deo got Jehangir Mahal constructed in 17th century and was named after King Jahangir. This three storied Mahal depicts the... Rai Parveen Mahal was built in 1618 by Maharaja Indrajit Singh for her favorite courtesan, Rai Parveen. The intricate work of the Mahal makes it... These are 14 cenotaphs (or Chhatris) in Orchha are tombs, in memory of the Bundela kings and the members of their dynasty. They are located near... The Ram Raja Temple is very auspicious temple where Lord Rama is worshiped in Orchha. Legend has it that it’s built where queen's palace used to...

Dinman Hardaul's Palace is in name of Hardol or Hardaul was a young son of Bir Singh Deo. This young prince committed suicide to proove his...

Located in Lakshmi Tal, this temple, dedicated to the Goddess of wealth, Mahalakshmi. The temple is a series of stone minarets and intricate...

Rani Mahal has a museum and palace on the first and second floors. This palatial building retains a regal feel on account of the fine... A sprawling hilltop complex standing marks the fort's status as one of the key strongholds in central India. With a moat on both sides, the... 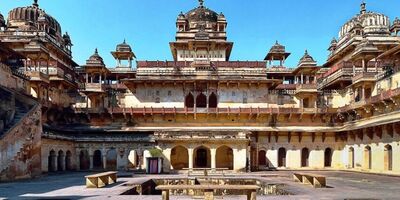 A 2-Day tour of the historic town of Orchha, explore the mesmerizing architectural beauties of this majestic town. Highlights Visit the Orchha Fort complex which houses the Jehangir Mahal, Raj Mahal and Rai Parveen Mahal. Explore the Ram Raja Temple and the numerous Centographs of...

Other travellers left Orchha reviews and tips for you

Admin
There is no wine shop in the town, though some restaurants serve beer. If you stay at a pricier place you may get an attached bar.

Admin
Photography enthusiasts should make a point to visit fort complex at least 1-2 hours before sunset to get great shots.

Admin
Get some idea of the history of the place before you are here or hire a guide, to be able to appreciate the place better.

As the town is small you can choose to walk to get around, or hire an auto but only after negotiating the price.
1 like
Report