Kullu Tourism | Places to Visit | Things To Do

Kullu is an important tourist destination in Himachal Pradesh. Kullu lies on the banks of Beas River at an altitude of 4000 ft above sea level. It was once termed as Kulanthpitha which means “The end of the Habitable Land." Kullu is wrapped by the Pir Panjal, Lower Himalayan, and Great Himalayan ranges. Its pine and deodar forests, flowering meadows, meandering Beas river, rocky ridges, and apple orchards make a tourist spellbound and wanting to come back for more. A good time to be in Kullu is during the Kullu Dussera, when the town and the inhabitants are in gaiety. This festival is celebrated in the month of October or November to commemorate the killing of the demon king Ravana at the hands of Lord Rama. During this festival, nearly 200 deities from nearby settlements are brought down to Kullu and devotees throng the town to pay their obeisance to Lord Raghunath. Similarly Holi celebrations are an experience too with the festivities lasting over two days.

Kullu is famous for its fruit orchards and the tourists can bite into some apples, plums, pears, and almonds and even take some along. Pashima shawls, caps, and Gadmas can be purchased from the Bhutti weavers colony which is located 6 km south of Kullu. Tourists should check out the stalls in Akhara Bazaar for Thanka Paintings. 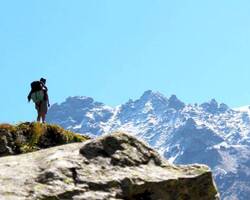 Hampta pass - A stunning crossover trek from Manali to Spiti The Chandrataal over Hampta pass trek offers that peek...

Top 10 Places to Visit in Kullu

Being an oldest temple of Kullu Valley, Raghunath Temple was constructed by King Jagat Singh in 17th century. As per Hindu Mythology and Indian... The Mahadevi Tirth got the name from Goddess Parvati. In the year 1962, Swami Sewak Das Ji Maharaj visited this spot in search of internal peace.... Bhuntar located at the confluence of Beas and Parbati River is actually the gateway to the queen of hills, Kullu & Manali. This place is also... Bijili Mahadev Temple is located across River Beas at an altitude of 2498 m above sea level. Lord Shiva presides here in the form of Shiv Ling.... Raison 16 KMs from Kullu is a perfect destination for a refreshing and silent holiday. A place where one can indulge in camping and nature... The Naggar Castle built by Raja Bhosal was now converted as Heritage hotel after slight renovations. From Naggar Palace, Tourists can get the... Hadimba Temple or Hidamba Devi is dedicated to Goddess Hadimba Devi, who is the sister of Hadim, a character of Mahabharata Epic. The temple is... The Manu temple is located in Old Manali, just 3 km away from Main Bazaar. This is the one and only temple consecrated to Manu, the Law-giver of... Hampta pass - A stunning crossover trek from Manali to Spiti The Chandrataal over Hampta pass trek offers that peek into the 2-sides of the Himachal. Starting from the lush green of Kullu valley to the barrenness of Spiti. This trek is a good initiation into high altitude trekking in Himachal...

Other travellers left Kullu reviews and tips for you

Admin
Do try the delicious local fruit wine available for less than Rs 200 per bottle.

Admin
Kullu is famous for handicrafts, handlooms and organic skin care products, so stock up when there.

Admin
Try to plan your trip around Kullu Dussehra Festival observed in the month of October/November.