Jammu Tourism | Places to Visit | Things To Do

Jammu – a land of temples, tales and teeming travelers. Jammu is famous as the winter capital of Jammu and Kashmir as well as the city of temples as it is home to many Hindu shrines. Jammu is a combination of everything; weather, food and of course, the picturesque locations.

Jammu holds a special place when it comes to spirituality and serves as an access way to India’s most popular pilgrim destination Vaishnav Devi in Katra which is almost 50 kilometers away from the city. The numbers of places to visit in Jammu are endless; the most notable one being the Bahu fort which also serves as a religious temple. Bahu Fort, where the founding bricks of Jammu were first laid by King Bahulochan; an ideal place where one can kick start their journey in the city. Set in a beautiful location, the fort overlooks River Tawi. It is also renowned for the Temple of Hindu Goddess Kali as well as the scenic gardens of Bagh-e-Bahu encircling the fortress. One should also witness the palace of Maharaja Mandi Mubarak of the Dogra Dynasty. Built in 1824, this palace holds an extravagance of Rajasthani and Mughal architectural designs. Though it has been sabotaged and shaken over the centuries, it still serves as a symbol of authentic Jammu heritage and personified resilience. The Pink Hall and the Sheesh Mahal (Palace of Mirrors) nestled in the complex shouldn’t be missed.

The Ragunath temple takes pride in being in the heart of the city. Another famous place for tourists is the Peer Kho cave which boasts of housing thirteen Shiva lingams in total. Other places of attraction are the Amar Mahal palace, Mubarak Mandi palace, Bage Bahu and temples like Raghunath Temple, Bawa Wali Mata temple etc. Other than these attractions, Jammu is famous for its stopover before taking the Vaishno Devi Pilgrimage as well as the Amarnath Pilgrimage. Jammu’s temples’narrate tons about Jammu’s divine history and sacred beliefs and faith people hold. A perfect peek inside, describing the life and times of the Gods and their long lasting relationship with the people of this country.

Jammu is a wonderful place for getting a taste of different cuisines and cultures all at once. Popular dishes consist of Sund panjeeri, patisa, rajma with rice and Khalari cheese. Dishes made with potatoes, pickling items and chaats are also very famous. All in all, this city is pure gold. It has the best of everything and proves that it is worthy of a trip. So the next time my friend when that extended weekend poses unabashedly in your calendar, extend it a bit more, GET OUTSIDE and visit Jammu.

Top 10 Places to Visit in Jammu Raghunath Temple is located in the heart of Jammu city and was built in 1857 by the then Maharaja of Jammu And Kashmir. There are seven shrines in... Bahu Fort is built on the south bank of Tawi river around 19th century by the Dogra Kings. The fort houses a Bawey Wali Mata mandir which is very...

Located in the Jammu, the Dogra Art Museum is renowned for Pahari Miniature Paintings. The museum is situated in the Pink Hall building in Jammu.... Amar Mahal Museum is located in the heart of the city and is famous as being the last official residence of the Dogra kings. Presently the same... Nandini Wildlife Sanctuary is spread over an area of 34 Sq. Km and is famous for its rare species of Pheasants. A must visit place for all wild... Akhnoor is a beautiful little town close to Patnitop with excellent views of the scenic beauty, Akhnoor is also a treasure trove for history...

Katra is where the holy temple of Maa Vaishno Devi is located. Every year hundreds of thousands of pilgrims visit this holy shrine, about 40 kms... 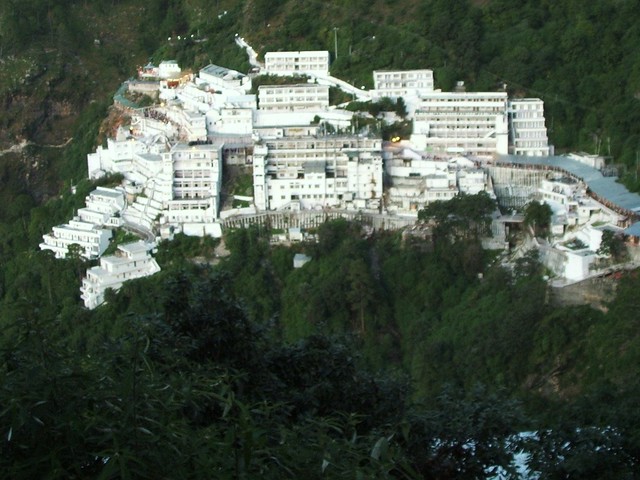 Vaishno Devi Temple is located near Katra and every year thousands of pilgrims visit Katra to undertake the 12 Km trek to the temple complex. The... A stunning mile long lake framed by taller darker woods and towering mountains, Mansar Lake is not only a beautiful picnic spot but also has the...

Surinsar Lake is located about 24 km from Jammu and is connected to the Mansar Lake. This lake has a mythological importance attached to it as it... Other travellers left Jammu reviews and tips for you

Admin
If going to Vaishni Devi Shrine, you can get a direct bus from Railway Station itself.